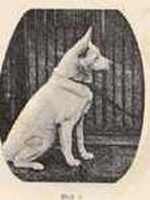 This is a photograph of a White German Shepherd coming from a German newspaper from 1906. The name of this newspaper is unknown, also is the name of the dog. Looking at the date  there is a real possibility that the dog may be Russian or Greiffa, one of Greiff's daughters.
First rumors
The only reports from a kennel of White Shepherds before 1900 come from Alsace-Lorraine. At the Royal Court of the House of Habsburg they were breeding pure breeds of White Shepherds. According to the stories, especially the ladies of the Court were very charmed by the looks and color of these athletic, but gracious white dogs. The more so because they matched perfectly with the marvelous silver-gray of crèmes white Lipizzaner horses which pulled the royal carriage. The aristocratic family von Habsburg where very influential all over Europe and their beautiful dogs were famous. This could have been a reason the English call these dogs White Alsatians (White dog from Alsace). Some abstention about this story is needed here. There are rumors and references to the breeding of White Shepherds without any proof about the truth of this story. On the other hand, there are lots of references to the "von Habsburg" bloodlines coming from big and famous Kennels. That makes this story interesting enough to be told.

1882
This was the year of the Hanover exhibition. Two shepherd dogs were shown there: the grayish white male Kirass and the pure white stud Greiff. The white shepherd dog Greiff was born in 1879, he was a white short coated dog with  standing ears. Unfortunately, there’s nothing known about his ancestors. The same Greiff was seen again in 1887, that time accompanied by his two white daughters Greiffa and Russian. What happened with these three dogs is still unknown. Further records from breeders of pure White Shepherds don’t exist. Fact is that the white Greiff would turn out to be the grandfather of the very first German Shepherd ‘Horand von Grafrath’. The irony of this story is that it will remain a question forever whether the White Shepherd primarily survived due to this fact or has it actually nearly caused their extinction in Europe. Still the issue of the origin of the White Shepherd gives rise to intense discussions.

20th Century
The first 15 years of the new century history of the White Shepherd runs parallel with the breeding of the German Shepherd. In fact, there is little to tell about White Shepherds in those days. Dogs were not bred for color back then which means that no colors were excluded from breeding. Looking back at the descriptions of the dogs we can often see: ‘yellow and gray’,  ‘gray and tan’, ‘white and gray’ or ‘wolf gray’. Should there have been any White dogs used for breeding in the first two decades,  there’s little to nothing known about this fact. There is, however, a picture of Berno von der Seewiese, born march 24, 1913 and bred by G. Uebe of Seehausen. A beautiful White stud, with an appearance apparently hardly different from a short coated stud nowadays. Berno is the son of Tyranin von Maingau and Gisa von Kameltal and is in the fifth generation a direct descendant from Horand von Grafrath and Mores Plieningen SZ 159 through Beowulf and his son Beowulf von Nahegau.
In 1906 the first dog was brought to America. It was Mira von Offingen. However, Mira did not live up to her expectations in America. Turning out to be no match for Queen von Switzerland at the New York Show of 1908 she was sent back to Germany without being registered in the American stud book. 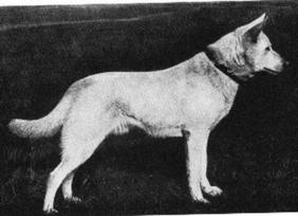 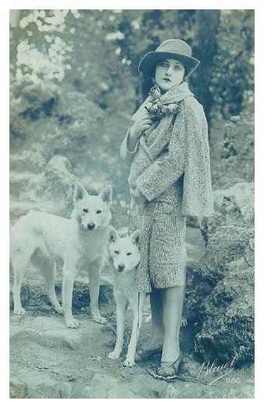 Ann Tracy
It wasn’t for nothing that Ann Tracy’s name became known worldwide to admirers of the White Shepherd. Ann was a member of the association and a breeder of German Shepherds. She was an enthusiastic admirer of the breed. The White Shepherds coming from her Kennel were connected with the first German Shepherds, Horand V Grafrath and his littermate Luchs. Also, she met the White Shepherds of the von Habsburgs Court (were she was invited many times); she never took one home and she never used one of them in her breeding program. In 1917 four white puppies were born in her kennel from two colored parents, with Luchs as the grandparent. The firstborn was Edmund, his littermates were Eadrid, Eric and Elf. Edmund was also the first White German Shepherd ever, to be registered in America. With these dogs Ann started the first white blood line in America. 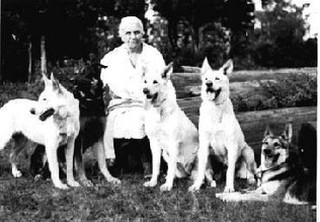 Geraldine Rockefeller Dodge
In 1923 Geraldine Rockefeller Dodge imported a few German Shepherds from the best German lines. Miss Rockefeller lives in an estate of more than 2000 acres in Morris County (New Jersey) with kennels for over 150 dogs. In her Kennel "Giralda Farm" she bred pure black, colored and white German Shepherd lines. Her dogs are famous for the best quality and lots of dogs today have their roots in this kennel.
Canada
It is not really clear, however, when the first German Shepherd entered Canada. Only in 1919 the first German Shepherd was registered in the Canadian stud book. Since the stud book didn’t record colors until 1959 it is impossible to determine for a fact in what year the first White Shepherd was registered. In 1922 the first Canadian German Shepherd Association was founded by H.B Boyd. The breeding program of this association was almost identical to that of America. Despite the presence of numerous good German Shepherd Kennels in Canada, reliable data about the White dogs are only available since a decade after the second World war.

Rough Times
In 1959 the 'VS' (‘Verein für Deutsche Schäferhunden’ - German Shepherd Association) decided to declare the White Shepherd as albino and gave a prohibition to using those dog in the breeding programs of the German Shepherd. The standard was changed: dogs with more than 50% white and the so called albinos were disqualified. In spite of a tremendous opposition, the new standard was accepted by the GSDCA (‘German Shepherd Dog Club of America’) with 306 votes on favor and 110 against this decision. Most of the important breeders agreed that breeding with white dogs gived paling of the coat and loss of the black saddle. In those years, just after World war Two, the White and the colored dogs were often bred together (too often) and 90% of the American German Shepherds are carriers of white genes. The Whites got the name to be albino, with blindness, deafness, bad temperament and a total absence of 'soundness'. In 1968 the prohibition to breed and to show white dogs was a fact. However, the white puppies were still registered, but with the disqualification of the coat color white. The changes in the standard from 1959 made the European breeders kill their white puppies immediately after birth. In no-time the White German Shepherd disappeared completely in Europe. 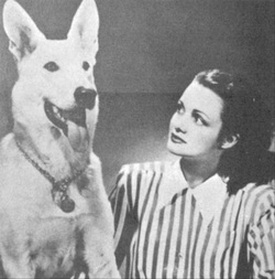 Chinook & Dorothy
Dorothy Crider
Despite of all fights for white dogs, they were doing very well in Hollywood. The most important personality in those years was the actress, breeder and dog trainer Dorothy Crider. Her bloodlines were very good and her dogs were stars on screens. Everybody knew Harvey Bindlestiff Offner (Chinook) and his son White Shadow Crider, who won the Award as best actor dog and who performed in 168 films. Dorothy herself received the Musart Best Actress Award. She was furious about the discrimination of the Whites:

"I have owned and trained white and dark German Shepherds for twenty-seven years. The difference lies in the individual animal, not the coat color."

"One thing I will not abide is cruelty to animals and in my opinion destruction of a white Shepherd because of it's color is criminal."

"My 'White Shadow' line has appeared in many motion pictures and have Pasty awards to attest to their intelligence. This line can be traced back to the Habsburg of Austria. If white Shepherds are supposed to be inferior, shouldn't one have been degenerate after all these years? Well they haven't and they're not!"
Europe
In the '70s and '80s the white German Shepherds were brought to Europe. Mrs Agathe Burch moved from the United States to Switzerland, her native Country, bringing with herself her male White Shepherd Lobo of White Burch. Soon after he is joined by White Lilac of Blinkbonny from England, and they are bred under the Shangrila prefix. Their offspring began to spread throughout Europe, and the Shangrila breeding lines were intermingled with the scattered remnants of White German Shepherds still in existence, as well as other American/Canadian imports. This was the first litter to be officially enrolled in the book of the origins. Therefore, the progenitor of this breed in Switzerland and in Europe can be considered the American male "Lobo" born in 1966.
In the last 20 years the American and Canadian White Shepherds spread to Europe and became so successful that in 2002 FCI recognized the breed that was officially denominated "White Swiss Shepherd", defined with the standard FCI 347. 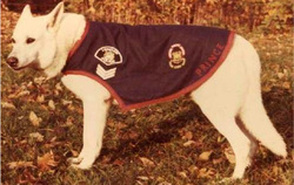 Prince
Prince the police dog
Many enthusiastic boosters of the white Shepherd were once anti-white. Such is the case of Sgt. Bryan Anthony of the London, Ontario Police Department.
"I was not aware Prince was white when I came to check the volunteer for the Canine Section. My immediate reaction, the result of twenty years of training and handling police dogs in Britain, was to walk away from a white German Shepherd.
But I decided the dog at least deserved a chance. After a great deal of examining I put aside the prejudice of many years. This dog seemed to possess the qualities of intelligence, aggressiveness and strength that are required for police dog training. Prince was one of two dogs selected out of sixty, the other being a standard Shepherd."

"The White Shepherd seemed to know exactly what was expected of him and performed beautifully. It was no surprise when he graduated at the head of his class. Prince's specialty is property search, and with his nose to the ground he has helped solve many cases. Prince has made a believer out of me. I just hope he can open the eyes of others who think whites are inferior!"
(source, AWSA Website)
*   *   *